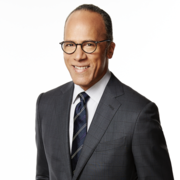 Lester Holt is an award-winning journalist at NBC News. He is the anchor and managing editor of "NBC Nightly News with Lester Holt," the network's flagship broadcast, as well as the anchor of “Dateline NBC,” now in its 29th season. Holt also leads NBC News’ special reports, breaking news and primetime political coverage.

Named the “most-trusted television news personality in America” by The Hollywood Reporter/Morning Consult poll, Holt became anchor of “NBC Nightly News” in June 2015 after anchoring the weekend editions of "NBC Nightly News" for eight years and co-anchoring "Weekend TODAY" for 12 years. Holt has served as principal anchor of "Dateline NBC" since September 2011 and joined NBC News in 2000.

During the past year, Holt has led NBC News’ coverage of the coronavirus and anchored weekly NBC primetime specials featuring critical, real-time information during the early stage of the global pandemic. During a special Dateline hour on the race for vaccines in November, Holt spoke with top executives at Pfizer, Moderna and Johnson & Johnson in their first joint interview about the plans for vaccine distribution. He also launched “Nightly News: Kids Edition,” a digital newscast aimed to inform and educate children during the especially challenging year.

Additionally, during 2020, Holt anchored NBC’s primetime coverage of the presidential election, including Election Night and the days following, the Democratic and Republican National Conventions, and the presidential debate and vice presidential debates. Holt also conducted the first interview with President-elect Joe Biden following the election and in October, he moderated a town hall with Biden, which was the most-watched town hall of both the 2020 and 2016 election cycles. Holt co-moderated the first Democratic primary debate from Miami, which kicked off the 2020 election cycle, and also hosted the most-watched Democratic presidential primary debate in history from Las Vegas in February.

As a preeminent broadcast journalist, Holt was selected to moderate the first presidential debate of 2016, which was the most-watched debate in American history. Holt also sat down with President Trump in May 2017, which stands as one of the most consequential interviews of his presidency, after Trump told Holt the firing of former FBI head James Comey was tied to the Russia investigation. In January 2017, he traveled with President Obama on the Commander in Chief’s final trip aboard Air Force One for an in-depth interview in Chicago.

Holt has spent the past four decades in journalism and has reported and anchored from breaking news events across the globe. In August 2019, Holt got rare access inside Tehran, Iran, where he spoke with top diplomats and Iranian Foreign Minister Mohammad Javad Zarif, and prior to that, he was in Normandy for the 75th anniversary of D-Day. During the previous year, he reported from the Korean Peninsula on the growing tensions between the United States and North Korea just weeks before the 2018 Winter Olympics.

During the past decade, Holt has reported from Manchester, Brussels and Paris on the terrorist attacks that took place across Europe. He anchored from South Africa during the Nelson Mandela memorial service, reported from Cairo on the political and civil unrest in Egypt during the Arab Spring, covered the 2010 earthquake and nuclear crisis in Japan, and reported on the immediate aftermath of the devastating earthquake in Haiti. Holt was also on the ground in Hungary during the migrant crisis in Europe in 2015 and anchored from Cuba numerous times, including during the opening of the U.S. Embassy, President Barack Obama’s visit and the funeral of Fidel Castro. Additionally, he was embedded with U.S. forces reporting on the ongoing military operations in Afghanistan in 2010 and 2012.

One of Holt’s trademarks is his on-the-ground reporting and his deep commitment to providing viewers with first-person accounts when disaster and tragedy strikes. He traveled to Southern California last year to cover the massive wildfires that caused hundreds of thousands of residents to evacuate during the statewide state of emergency. He also reported from El Paso in August 2019 on the mass shootings there and in Dayton, Ohio. He reported from Las Vegas on the Mandalay Bay shooting, providing first-person accounts of the devastation, and from Sutherland Springs, Texas after the massacre in a church took the lives of 26 people. Holt has also covered more than a dozen natural disasters, including the aftermath of Hurricane Katrina in 2005. During the fall of 2017, he went to Houston and Southern Florida to get live, first-hand perspectives of the devastation caused by Hurricanes Harvey and Irma.

Over the past few years, Holt has distinguished himself as the leading broadcast journalist on criminal justice reform. In 2019, he led Emmy-nominated and groundbreaking series, “Justice for All,” across all NBC News platforms. For the network-wide series, Holt spent three days embedded inside Louisiana State Penitentiary, the largest maximum-security prison in America, and moderated the first-ever televised town hall from a maximum-security prison at Sing Sing, all putting a bright spotlight on mass incarceration and the many complex issues around it. Additionally, Holt has reported on several high-profile justice-related stories and landed many exclusive interviews, including the first interview with rapper Meek Mill following his release from prison, an interview with Matthew Charles, the first person released under the First Step Act, and the first interview with Cyntoia Brown Long since her prison release.

For “Dateline NBC,” Holt has anchored numerous specials and investigative reports, such as “Life Inside,” his most recent report for the “Justice for All” series. Few years prior, he worked on a story of injustice that examined the connection between childhood asthma and poverty in America. Holt also reported on wrongful convictions involving Richard Rosario and Johnny Hincapie, two cases that made national headlines. Additionally, he reported on the aftermath of the Great Recession as part of the “American Now” documentary series.

Before becoming co-anchor of "Weekend TODAY” in 2003, Holt anchored "Lester Holt Live," a daily news show on MSNBC. Holt served as a primary anchor for MSNBC's coverage of major news events, including Operation Iraqi Freedom and the war in Afghanistan, and he was the lead daytime anchor for MSNBC's coverage of Decision 2000. Holt also served as anchor of "Countdown: Iraq," a nightly news telecast concentrating on the latest developments surrounding the war with Iraq, from October 2002 through March 2003. Holt started at NBC News in 2000, anchoring “Newsfront.” While at NBC, Holt has covered every Olympics from the ground since the 2002 Winter Olympics in Salt Lake City.

Holt came to MSNBC after 14 years at WBBM-TV in Chicago where he served as the afternoon and evening news anchor. After studying government at California State University in Sacramento, he began his television journalism career as a reporter at WCBS-TV in New York in 1981. The following year he moved to Los Angeles to report for KCBS-TV (then KNXT) before returning to WCBS in 1984.

Holt has been recognized with numerous honors, including multiple Emmy Awards and a Robert F. Kennedy Journalism award. In 2021, he was honored with the prestigious Edward R. Murrow Lifetime Achievement award. Two years prior in 2019, he was honored with the Walter Cronkite Award for Excellence in Journalism and in 2017, he received the Quinnipiac University’s Fred Friendly First Amendment Award. In April 2016, Holt received several notable designations: he was featured on TIME’s “100 Most Influential People” list and was named “Journalist of the Year” by the National Association of Black Journalists.