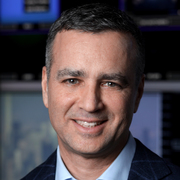 Adam Wiener has spent more than 30 years at the forefront of media evolution. He leads all aspects of digital for the owned and operated CBS Television Stations, including the roll-out of CBSN Local OTT. He began his career at CBS News where highlights include manning the Foreign Desk as the Cold War ended, covering Governor Bill Clinton’s 1992 presidential campaign. Adam served as Senior Producer of “Up To The Minute,” the first news broadcast of any network with a dedicated website. Adam was tapped to help launch CBSNews.com, combining a lifelong love of computers with traditional media expertise and became, at the time, the youngest Executive Producer in CBS News history. He has held senior digital business and operational management roles at web start-ups and traditional media companies, such as NBCUniversal, IAC and Dow Jones. He returned to CBS in 2010 to launch CBS Local Digital Media, of which he was appointed Executive Vice President and General Manager in 2016. Adam sits on the Digital Officers Committee of the National Association of Broadcasters and is an Affiliate Board Member of Digital Content Next. Adam received a BA in Journalism from the University of Rhode Island, where he serves on the Executive Advisory Board of the Harrington School of Communications and Media. He was inducted in to the URI Hall of Fame in 2016. Twitter: @adamwiener