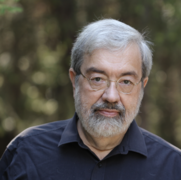 Dave Hershberger has bachelor’s and master’s degrees in electrical engineering from the University of Illinois, and a bachelor’s degree in math from Goshen College. He has worked for Harris Broadcast, Grass Valley Group, Axcera, and Continental Electronics. His career was about evenly split between radio and television design projects. His work was mostly exciters and modulators for transmitters, and low level signal processing - most of which has been digital signal processing in recent decades. He co-developed the world’s first digital FM exciter as an experimental prototype which was tested on-air in 1986. There were a few non-broadcast projects including new X-band uplink transmitters for the JPL/NASA Deep Space Network. Dave has 21 US patents granted with more in process. Dave has made numerous NAB, IEEE, and SBE presentations along with NRSC, SMPTE, and ATSC committee work. He retired in 2017 but is still doing some consulting. He lives in Tahoe National Forest near Nevada City, California.