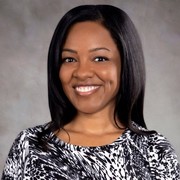 Yasmine Osborn is the Director of Diversity and Inclusion at Hearst Television (HTV). In this role, she is responsible for driving the diversity, equity and inclusion strategy across Hearst Television, with the aspiration to recruit, support, and advance a diverse workforce that represents HTV markets and society. With a particular focus on employee resource groups, mentorship and sponsorship programs, employee engagement, training and development programs, talent acquisition strategies and external partnerships, her overarching goal is to cultivate a more diverse, equitable, and inclusive community for HTV employees.

Prior to joining Hearst Television, Yasmine was instrumental in developing the diversity and inclusion program at the United States Tennis Association with a focus on attracting, engaging and retaining diverse talent; owning accountability for driving equity and belonging; and enhancing organizational culture, brand reputation and social impact.

Yasmine earned her undergraduate degrees in both Psychology and Sociology from Northwest Missouri State University. At the same time, she captained the women’s tennis team, earned NCAA Division II Female Athlete of the Year honors, and was an NCAA Division II All-American. Yasmine received a Master’s Degree in Public Administration and Sports Management from the University of Georgia and completed the Diversity and Inclusion Certification program at Cornell University.