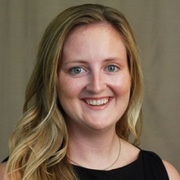 Julia Ziegler was named WTOP’s Director of News and Programming in 2019.

From 2015 to 2019, she served as WTOP’s Digital News Director. In this role she oversaw the creation and development of all of WTOP’s digital news products, including WTOP.com, the WTOP app, social media, video, podcasts, smart speakers and more.

Ziegler was also part of the WTOP team that created and produced the award-winning, true crime podcast, 22 Hours: An American Nightmare.

She began her career at WTOP in 2003 and has held a multitude of roles within the company during that time, including managing editor of WTOP.com’s sister station, FederalNewsRadio.com, for seven years.

Ziegler was introduced to WTOP in 2002 when she served as an intern at the station.

Born and raised in Pennsylvania, Ziegler graduated from Penn State in May 2003 with a degree in journalism. She still spends her weekends there in the fall, cheering on the Nittany Lion football team. She has her M.A. in News Media Studies from American University.

Ziegler was part of Hubbard Radio’s inaugural NextGen class, a program designed to grow and develop leaders within the company.